Open letter to the Scottish Government 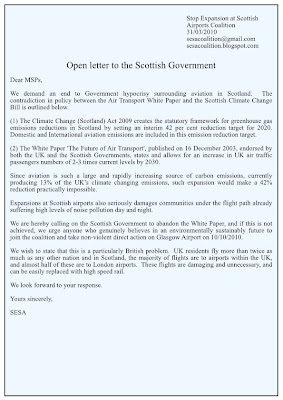 Stop Expansion at Scottish Airports
is a broad coalition of groups and individuals fighting the adverse affects of airport expansion in Scotland.

We call on the Government to scrap the Aviation White Paper and end the hypocracy surrounding aviation. If this is not met, we are calling on public action and invite all groups and individuals who care about the environment and social justice to take non-violent direct action to disrupt Glasgow Airport on 10/10/2010.

The damage of aviation

Flying is a particularly British problem: we fly more than twice as much as any other nation (including America) and aviation accounts for 13% of our greenhouse gas emissions. In Scotland, a third of flights are to London and and over half are within the UK. People living under the flightpath have to bear incessent noise pollution, even during the night. The mad thing is that high speed rail can provide a practical, sustainable solution.